Ruby was my first love, my first language was C, and now I go steady with C#. This is a typical romantic journey for most developers; falling for a shiny new methodology, only to flirt with a statically typed language later. But there’s one thing I have been consistent with: I don’t want to write JavaScript if I don’t have to.

Now, as a pragmatic developer, I recognize why I might need JavaScript, but I’d always prefer to be in the more comfortable confines of a bigger language. Since the birth of node.js, there have been plenty of devs who are happy to use JavaScript exclusively — for both client and server. And admittedly, I did like the control that media queries gave me with responsive web design.

I’ve always thought Ruby on Rails was a little easier to manage because it was “opinionated” — even if it was a little too keen to push you into a database. So I was intrigued by the idea of “HTML Over the Wire”; and Hotwire specifically. It seems to give you JavaScript-like abilities without actually having to write any. So I thought it might be time to fire up a Rails project and see how that went.

So, let’s start with a simple Rails installation. We just want a form and response. I’ll assume that you are comfortable with what Rails is and its basic tenets, but maybe (like me) you haven’t done all this stuff for a while. So here’s what I’ll do:

I have an rvm (Ruby enVironment Management), so let’s try to install a new ruby to match what we need for Rails. Naturally, whatever Ruby I did have wasn’t high enough:

Then the important stuff:

That gave me 35 gems and documentation.

Ok, so let’s ask the generator for a skeleton application, with no tests of active record.

At least we have enough to throw something immediately on the screen. As I demonstrated with Sinatra, the current favored server is called Puma. So on my Mac, we can wander into the app directory and start a server with Puma:

And at http://localhost:3000 we see the default Rails page. I can already see some Hotwire things in the Gemfile (there is a “turbo-rails” gem), so perhaps we don’t need to do anything further for that.

We want a simple form, like a sign-up page, and then update it after submission. I used to use a Flash Message for this in the past. So in a Model/View/Controller world, we want a user model, then a form for our “new user” view, and finally a registrations controller. No, I haven’t written any of these things yet.

Fortunately, despite not using Rails recently, my old friend the “routes.rb” file still exists. A route is how we describe our internal architecture in good REST fashion. So I associate the URL GET request “/sign_up” with a new registration, and it’s POST response appropriately too.

OK, so we better make a registrations_controller. Remember, the Rails world is very opinionated, so stick to the mantra and use the words and phrases as expected. We are already being difficult by not having a database!

But first, a quick User model. Note that because I ditched the database, we are using ActiveModel to persuade Rails we are good citizens. So in “app/models/user.rb” we have:

And this minimal view in “app/views/registrations/new.erb.html”

We get this blessed result in the browser:

OK, that is cool but we need a more fulsome form. After all we need something for Hotwire to do.

Now, this isn’t a post about the multitude of ways you can get a screen to look nice, but I’ve squeezed a bit of juice out of Rails and HTML, so the form looks alright without having to do anything much in CSS. For a real project, you would probably want to do the opposite.

The Rails smart magic works via “form_for”, between the ERB tags, which looks at the model (i.e. user.rb) and riffs on that. It even deduces that “Create User” would be a good default for the submit button text. This is what you are paying for when using Rails.

Here is the nicer view:

Note the URL override to send the response to the sign_up path we have made in routes. I’ve identified the fields, as will need that shortly. The rest is just Rails and HTML.

Just to make it a little cleaner, I have added a simplistic CSS in app/assets/stylesheets/application.css:

This all gives us this: 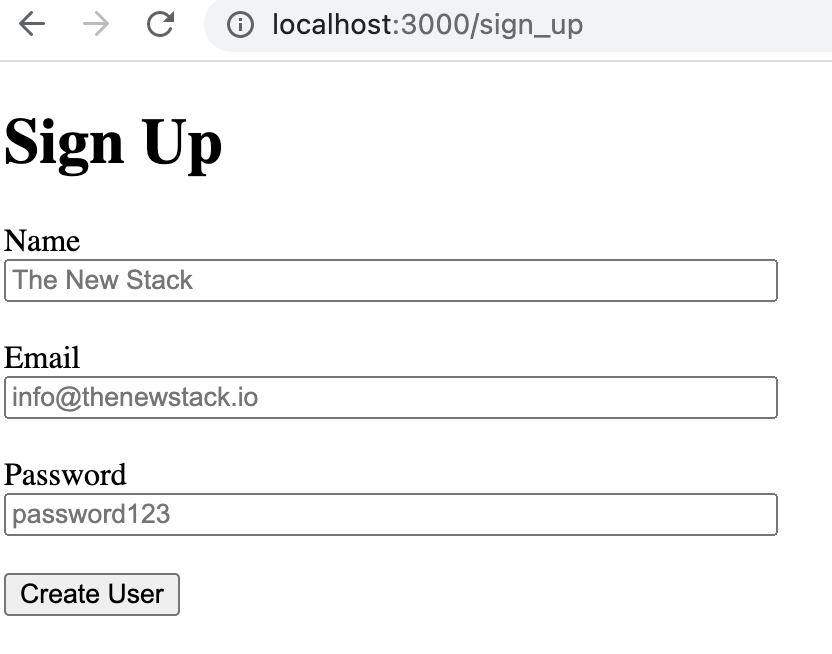 OK, wonderful, but this post is about Hotwire. Normally we would have to redraw a new page here, or use a little Flash Message to somehow confirm that a user has been created. But what Hotwire in its Turbo Stream mode gives us is a chance to replace a section of code in response to an action. This is done in AJAX so no screen drawing is needed, but also it is done in a nice Railsy way. A Railsway. Take a look at “app/views/registrations/submit.turbo_stream.erb”:

Firstly, note the nomenclature of the filename. The rest is kind of simple; in this case we replace the identified div with some simple HTML.

I added the create method to the “app/controllers/registrations_controller.rb”:

I clearly haven’t quite got the variable use right here: the @user in the create that reads the incoming parameters is the important thing though.

Here is the page after you create a user: 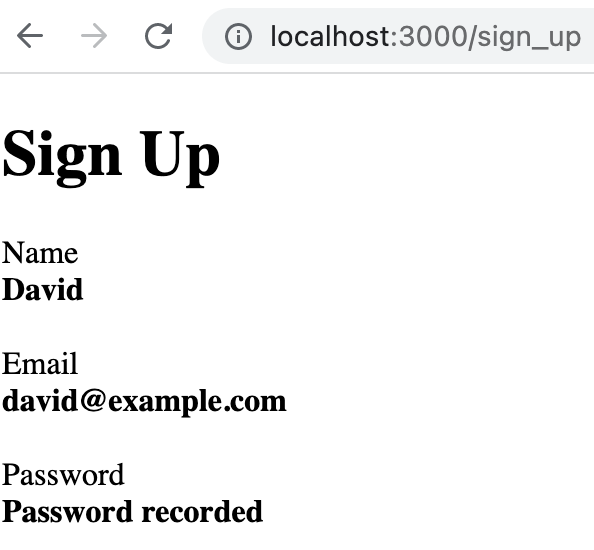 So, to summarise the behavior and flow:

While I took a bit of time to grok how Rails is currently set up, and I almost certainly haven’t used it in the official way, it is still very easy to play around and see the results. However, familiarity with HTML and CSS are still necessary — even if we can briefly ignore our JavaScript overlords.